We, the MGVS team, would like to share some of the highlights of our activities of the past year with you. MGVS continues to strive to bring about sustainable changes that uplift the poorest of the poor and marginalized persons, including women and the disabled, living in the more remote Himalayan villages of Garhwal. And this year has been a busy year as always. But it has also been an especially rewarding one – the efforts we have been putting into 21 villages+ of 8 Gram Panchayats of the Saklana Valley, for almost 6 years now, have started to bear fruit as the people of the valley begin to take on their rural challenges independently.

On behalf of MGVS, I thank you all for your ongoing support, without which we would not be able to help those who are truly at a disadvantage, within this area of Garhwal. Please keep us in your prayers, and until we report to you again, the MGVS team join me for now, in wishing you every blessing for the New Year to come and a Merry Christmas!

MGVS has become well-known in our community as an NGO with organic farming experience. Woodstock School approached MGVS Coordinator, Surender Singh, who was trained in organice/natural farming in Japan, to promote awareness about organic farming, to the students of Woodstock School. Since then, MGVS has been managing a pilot farm known as “Turner Organic Garden”, where students have the exciting opportunity of getting their hands into soil on a regular basis. 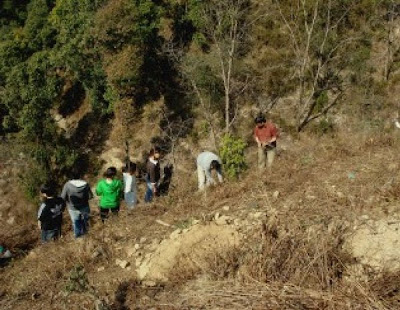 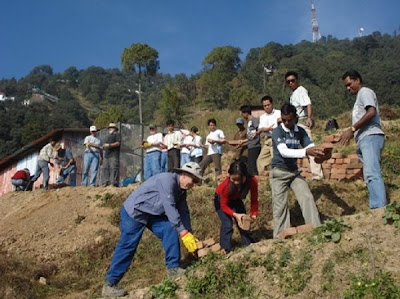 Allahabad Agriculture Inst. students visit Woodstock Garden
and help Woodstock Alumni build a chicken house for manure.
THE ORGANIC COOPERATIVE GROWS
MEN HAVE JOINED THE WOMEN
On April 10th, 2008, 21 men farmers joined the HIM Organic Women’s Cooperative of Saklana, which has grown itself to include 28 women farmers this year, up from 14 members it started out with in 2005. The men have formed a sub-cooperative under the larger Co-operative, and women officers are training them in certification, govt. schemes, organic farming practices, including fertilizer preparations in their fields, and marketing. 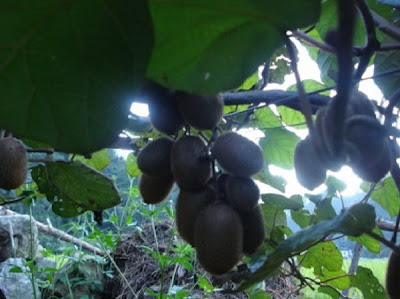 Kiwi trees planted 3 years ago by women Co-op members
bearing healthy fruit in 2008
The Women’s Co-operative gave sub-cooperative members Japanese rice, leek, soybean and gobo seed to help them get started; the Women’s Co-op has established a specialized market of customers who are interested in Japanese foods and their Miso has become popular in many major cities all over India. The men farmers have agreed to farm solely organically as members of the sub-cooperative. They opened a joint bank account in October and they have just harvested their first crops, which they are selling through the Women’s Co-op. The addition of these new members is especially exciting for the women farmers because the men farmers tend to have more land. 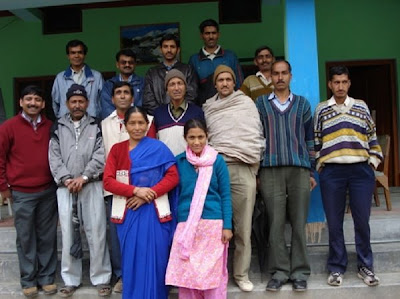 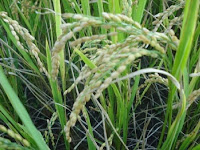 On April 23, 2008, MGVS Staff, and Co-operative members Deepika and Bindeshwari, joined with a group of Allahabad Agriculture Institute Staff for an observation trip to Dhakrani, outside of Dehradun. There, they visited a govt. project run by the Krishi Dept. of Uttarakhand. Information learned about govt. rice thresher schemes that was gained at this visit, among other things, was spontaneously shared with the farmers, new and old, of the Co-op and Sub-Co-op afterwards. On October 1st, then, two Co-op officers organized a large vehicle and went to the Thathur Block, where they purchased five rice threshers for ten Co-op farmers, at half price (govt. subsidy) for Rs. 1700/- each. These rice threshers are smaller – easily portable and less likely to require repairs when moved from farm to farm, unlike the larger thresher, previously & presently, also available to Co-operative farmers. 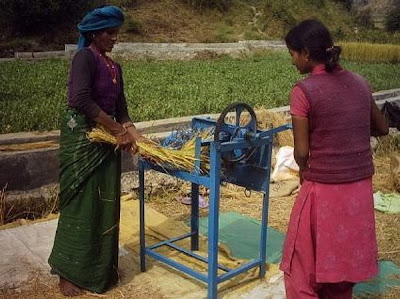 TOILETS CONSTRUCTED FOR POOR FAMILIES
MGVS has been constructing toilets for poor families living in the Saklana Valley for the past 6 years as well as encouraging residents. Each year our team goes through a selection process to seek out the most needy families. 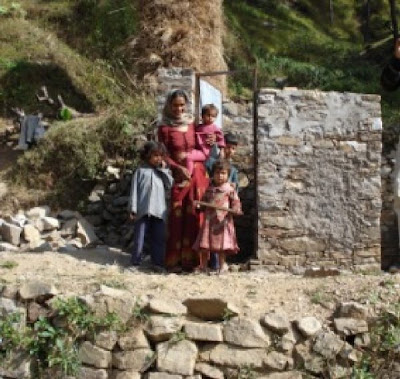 This year 10 toilets have been constructed by MGVS:
Five more toilets are presently under construction. 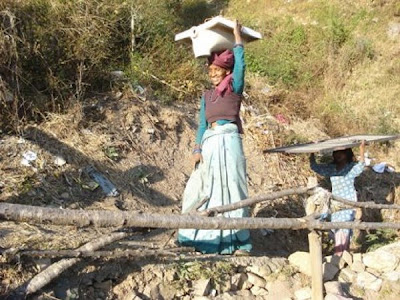 Toilet construction, October, 2008
GUIDANCE FROM TEAR AUSTRALIA
(our funding partner)
TEAR Australia Program Officer for India, Ms. Jenny Beechey, visited with the MGVS team from October 22-24, 2008. She spent a day “in the field” with the villagers and a day and a half with us here in the office. The team prepared a map as part of the visit’s activities, representing our work and the outcomes of MGVS efforts in the Saklana Valley. The results of the exercise helped clarify the work of MGVS for Ms. Beechey and for the map in office team itself as a whole. 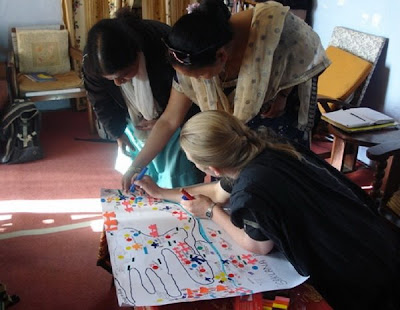 Ms Jenny Beechey reviews MGVS
Ms. Beechey engaged villagers in a similar exercise as well, when she was with them, on Day 2. The team worked together with Ms. Beechey, in the office on identifying effective indicators of changes MGVS attempts to bring about in Saklana Patti. We had a lot to learn from Ms. Beechey, who always brings new ideas to this corner of the globe when she visits. 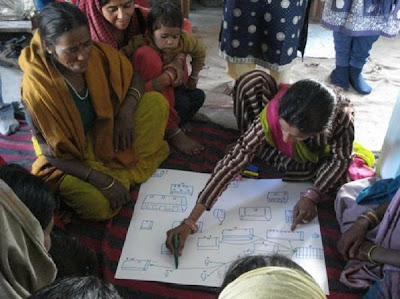 The MGVS founder, Rev. R. C. Alter, along with a group of 8 people, four women and four men - part of the Wooster Mission Study Tour Group, from the First Presbyterian Church of Wooster, OHIO, visited the MGVS project from the 7th to the 9th of November in 2007. During their visit, they spent a half-day session with the MGVS team at Oakville, Rev. Alter’s house in Mussoorie, which was followed by lunch at his house. The group also spent a one-day visit at the MGVS field site, to see the project at work. The group also visited the MGVS Kaplani School. The group and the school children had a really enjoyable time. The children put on a cultural show for the group. Rev. Alter has been back since in September of 2008 to visit the project again to see the beginnings of construction of the new high school in Kaplani. 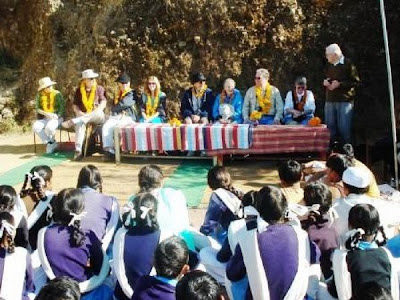 ✥✥✥✥✥
An old friend of MGVS, Mr. Bill Mosher, member of Warren Wilson Presbyterian Church USA, and a former teacher of Warren Wilson College, visited the MGVS project, once again in April 2008. While he was with MGVS, he visited many villages of the Saklana Valley and he took many photographs of the people of the area, for his photograph project, specially set up to raise money for MGVS. 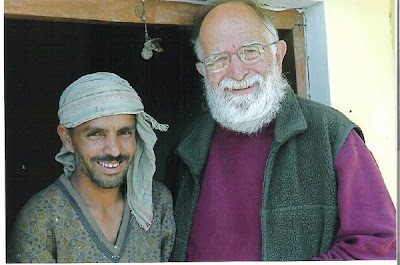 Mr. Bill Mosher visits with Mr. Kothari of Sarona Village
In July, MGVS had the pleasure of receiving a group of 12 college students, who were introduced to MGVS by Cate Whitcomb, Woodstock Graduate (class ’66) and former Director of Development for Woodstock School. She has recently moved from the US to Delhi, where she is now the Director of Delhi IES Abroad. IES Abroad is an agency that manages the study abroad for a consortium of over 170 colleges and universities in the US and in 30 centers around the world. MGVS was honoured to represent an example of an NGO operating in India, to which these students could be exposed. The group had many questions, and after tea, they visited the Kaplani School in the rain.
Posted by MGVSNEWS at 10:02 AM No comments: