We are happy to tell you the work our team has put into the Saklana Valley, Tehri Garhwal, over the last 8 years, has brought about some positive changes. Organizations, such as the Self-Help Groups, the Panchayat Health, Education and Water Committees, the Women Farmers Cooperative, the Schools, are all working together today, to provide a healthy, clean and productive environment across the valley – taking responsibility for their people’s needs, including their women, widows, children and disabled community members, is now becoming a way of life for the villagers of Saklana. Women are taking an active part in their political roles in the Panchayats. This community organization has recently attracted other organizations, and an increased number of government programs to their area. A horticultural centre and an animal husbandry office have also opened up, providing valuable services.

An evaluation of MGVS activities in the Saklana Valley was conducted earlier this year, indicating that sustainable changes made in this area, were at the stage where MGVS could now spend more of our time in a further isolated area of Garhwal. We have located such an area near the Tehri Dam, called Naugun Patti (Valley), where the people are experiencing an intense need for development. They have not been assisted by NGOs in the past, and the government has not offered this community much more. Presently, we are preparing a development plan together with the village councils of seven Gram Panchayats - 700+ families, and we are completing a selection of the poorest who require immediate assistance.

On behalf of the MGVS team, I would like to tell you how much we appreciate your continued support, without which MGVS would not have not succeeded in its mission to serve underprivileged people of Garhwal in North India for the last 28 years. We feel we are truly blessed by your invaluable help and look forward to your continued support as we work to uplift those in need in Naugun Patti. Thank you for your prayers and your hope. 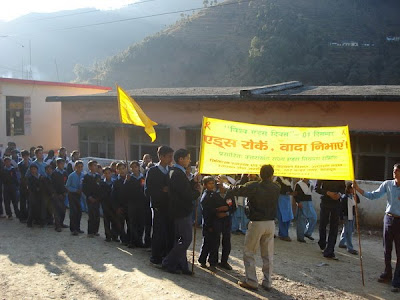 "AIDS ka gyan - bechayae jaan!"
("Know about AIDS - save lives")
On World AIDS Day – December 1, 2008, the Saklana Patti community held a 5 km rally that passed through 10 villages. Over 1000 villagers participated in the rally, including school teachers and students from the three high schools, as a result of HIV/AIDS/STD training provided by MGVS at these schools over the past 5 years. The students’ parents, newly elected panchayat representatives, previous Village Council chiefs, Govt. Health Workers as well as Village Health Workers, Veterinary Dept. Staff, and Panchayati Health Committee members from 6 Gram Panchayats also participated. The rally was divided into 3 sections. One group started out in Satyon, the marketplace, a second started out in remote Hatwalgaon, and a third started out in Village Silvani. Different smaller groups joined the rally as it passed through their village, and all three groups ended up in central BeerNagar.

MGVS supported the event, organized by the Health Committees and the high schools of the area. This hit event brought the people across the valley together on a health awareness issue in a large way, showing a new importance placed on health and a great ability to work together.

MGVS invited “TV Channel 100”, who interviewed the school children, school teachers and MGVS Staff and broadcast the rally on TV over the next 2 days. The rally was also reported on in the local newspapers, in the Dehradun “Dainik Jaagran” and in the Dehradun/ Mussoorie “Amar Ujala” the next day. 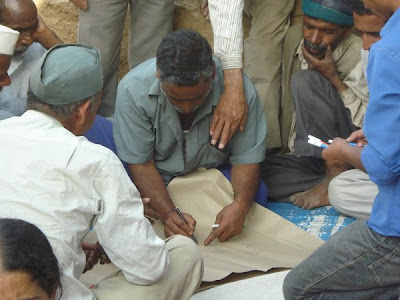 Naugun Patti Pradhan Makes a Map
of his Panchayat Area
In May 3rd, 2009, the MGVS team held a meeting with 10 Village Council Chiefs – pradhans, of the Naugun Patti area. At this meeting, the pradhans participated in a mapping exercise. Using the maps, pradhans pointed out existing resources and facilities. Afterwards, they discussed their concerns with MGVS. These included a lack of health facilities and drinking water, little forest/jungle fodder, lack of agricultural knowledge, non-irrigated land, low-quality seed, and middlemen who take unfair profits, through the sale of seed. The pradhans complained as well, about illiteracy, government schemes not reaching their people, and problems with migration, due to unemployment, whereby the elderly, women and children, are left behind with poor services. 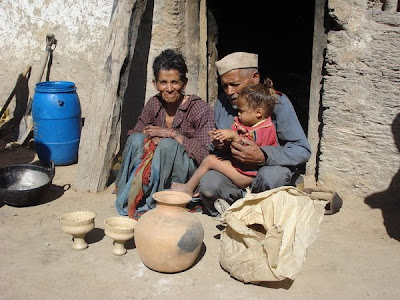 One of the poorest families in Ghiyakoti Village
within the Naugun Valley
A number of participatory rural assessments (PRA), focus group discussions and individual interviews have also taken place in 14 villages. Together with MGVS Staff, villagers developed a list of their problems, and then categorized and prioritized their needs, in order to develop a focused strategy for making change. During these PRA meetings, our team came to learn that Health and Hygiene is in fact, a serious issue in most villages. Lack of water: skin rashes, diarrhoea and lice are prevalent, especially among children and immunization is not reaching this area: the Infant Mortality Rate is at 20%. Traditional Birth Attendants “DAIs”, available in some villages, are not trained, and in one case a 72 year old man is performing deliveries: the nearest PHC is 22km away by foot + 17km by road.

Before MGVS initiates any community organization activities to encourage the villagers to work towards their community needs, MGVS feels that two areas need to be addressed immediately: community health (immunization and ANC/PNC) and Income Generating Programs for the poorest families. The MGVS team is working on these issues.

TOILETS CONSTRUCTED BY NOBLES STUDENTS
AND PATRANI-DONK VILLAGERS
In March 2009, Mr. Ben and Mrs. Sarah Snyder of Nobles & Greenough School, Massachusetts, USA, visited MGVS for one week, with a group of 15 students from their school to participate in a low cost toilet construction project designed by MGVS for the villagers of Patrani and Donk, where MGVS runs a Primary School. The students worked very hard, completing 11 toilets in 4 days, in spite of the long hike up and down to the villages. In most cases, the villagers prepared the soak pits for their toilets and collected the necessary stones as they could not contribute financially. 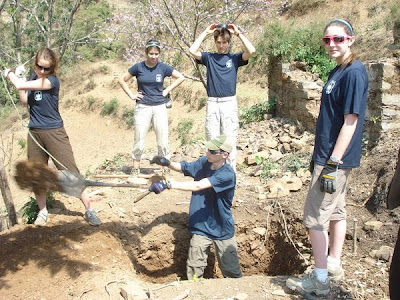 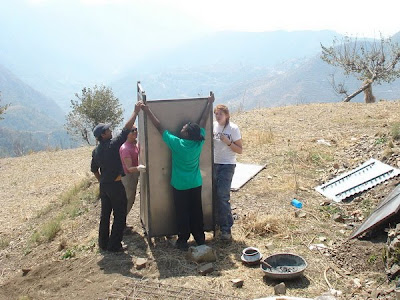 Nobles Students Constructing a Toilet
One toilet, however, was built entirely by the students, for the Widow, Jona Devi, sister-in-law of Dil Das, a legendary hunter of the area. At the end of the week, the Nobles group, MGVS Staff and the villagers celebrated together in the village of Donk with food, dance and song.

Since then, Nobles students, Julia Hermon and Julia Downs, have started up an MGVS club at the Nobles School, which has written letters with pictures for the Donk Primary School students. Recently, the letters were happily received by Donk students and they have written back. MGVS provided translations. 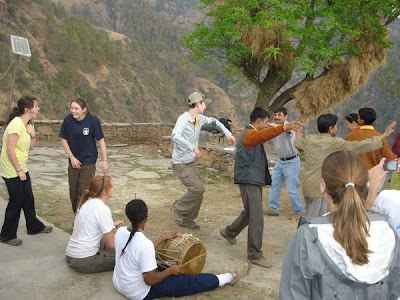 Note: Part 2 will be posted in a couple of months.
Posted by MGVSNEWS at 8:52 AM No comments: