CLEAN WATER
FOR THE SCHOOL CHILDREN OF SAKLANA
As part of the MGVS School Health Program, MGVS had trained Village Health Workers to give health & hygiene talks, once a month, in the 20 schools of the Saklana Valley starting 3 years ago. However, talking about washing one’s hands soon seemed futile without running water available. Therefore, ten schools were identified in 2007 and HAVE Canada very generously made pipelines to these schools possible, along with water filters, in September of that same year. MGVS completed the project in March 2008. Water filters have since been distributed to the remaining ten schools in the Saklana Valley, as well, in November 2008 through support kindly offered by TEAR Australia. The pipelines and filters are being properly maintained by each school. 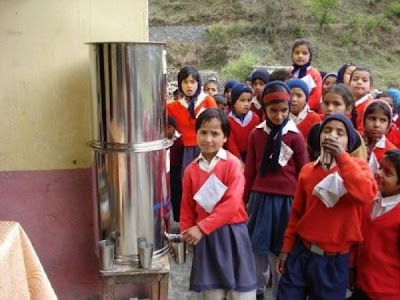 To compliment the pipelines, MGVS has been systematically constructing toilets in schools where there wasn’t one. Presently, MGVS is working on ensuring each school has 2 toilets, one for boys and a separate one for girls, in an effort to improve hygiene, as girls tend to avoid toilets used by boys because they feel shy. Students are now washing their hands habitually before the midday meal and a reduction of droppings around the schools has been noticed by villagers. A number of parents have started to put money into the purchase of water filters for their homes, and school teachers have mentioned they feel this is related to filters now being available in the schools. 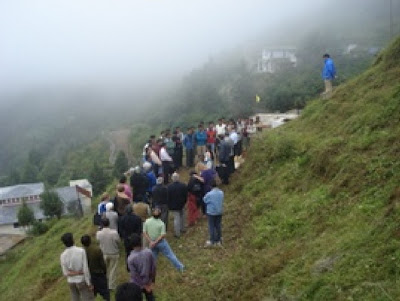 MGVS runs two schools: the Donk Primary School (since 1994) and the Kalpani High School (since 2001) as part of our Literacy and Schools program. Kaplani School started out with just a single teacher, through support offered by the Winterline Foundation. The 11 students attending, at that time, had the option of studying in either 6th or 7th grade. With the addition of the 8th, 9th, and 10th standards, over the last 7 years much has changed.

Today, 54 rural children (26 girls and 28 boys) attend and in April of this year, the school’s first class graduated: 13 Class 10 students passed their final (external) examinations. This is an important milestone: a Tenth Grade Certificate (Pass) is a basic requirement for most jobs and skilled trainings in India today. Previously, these students would have either discontinued their studies at the 7th standard, or moved far away from home in order to complete the 10th standard (not a possibility for girls).

Contruction of Kaplani High School finally begins
MGVS is happy to announce that after a long struggle to gain permission, land registration papers for the new high school building were finally received in June of this year, and that construction has finally begun as of October 15th. 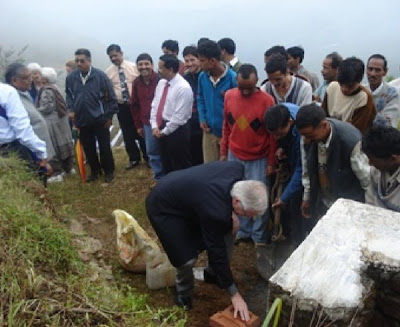 Kaplani villagers and guests from Woodstock School celebrated the new permission, together with us, at a groundbreaking ceremony on September 17th. MGVS is truly blessed and grateful for the great patience shown, and for the generous donation made, by Mr. Robin Parker, in memory of his daughter Heidi Parker, for the building project, including the purchase of land. Both Woodstock School and the Winterline Foundation have helped make this project possible. 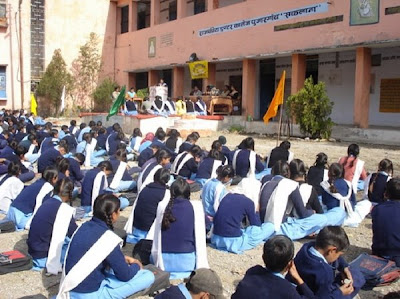 In the interest of building a strong community of equal members, MGVS has been encouraging youths from Classes 8-12 to gain a good understanding of the opposite sex through training provided as part of our Gender Sensitization & Awareness program, since June 2004. Together with 3 high schools of Saklana Patti, MGVS organized a debate on Gender Differences at Govt. Satyon Inter-College on November 25, 2008, in Satyon Village. The chief guest for the debate was Block Development Committee member, Mrs. Savitri Negi. Two representatives of the NGO Mahila Samakhya, dedicated to women’s issues, were invited to sit in on the debate as judges, and the principals and teachers from participating schools were also present. 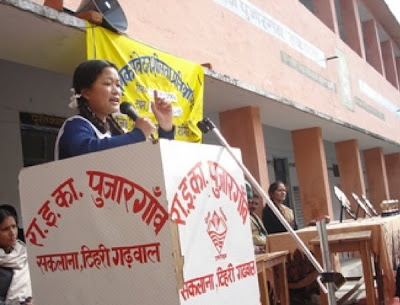 Two girls and two boys from each high school were invited to speak, for 5-6 minutes each, on gender differences they experienced in their families and villages. The debate offered these students a platform to speak out about their frustrations and present suggestions. Some girls were quite bold and complained about the aborting of female fetuses, as compared to the celebrations that carry on when a boy is born. Receiving less food than their brothers was mentioned, and that it is unfair that girls, at age 16, are usually doing most of the housework, possibly earning, going to school, and yet girls are being treated like a burden because they aren’t married off yet. Brothers, on the other hand, who were not contributing to the family, and perhaps drinking, are seen as a bonus. Opposing points of view about girls not going out as boys do in their communities were also argued. In the end, however, everyone agreed that more equal treatment is needed.

First place went to Govt. Inter-College Satyon, Class 10 student, Haemlata Bhatt, 2nd place to Govt. Inter-College Satyon, Class 10 student, Unkur Thakur and 3rd place went to Marora High School, Class 9 student, Jaanki Rana. Shields were awarded to the schools and speakers were awarded cups, and/or “Satisfactory” certificates. The debate was a positive experience for all: over 500 youths attended the event and the students who spoke had an opportunity to develop their public speaking skills. 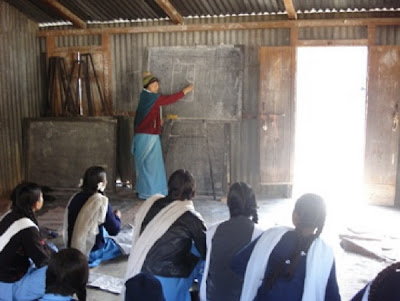 Villager Kamli Devi started out a few years ago as a trainee in a Sewing & Knitting session arranged by MGVS in her village Marora. Soon afterwards, she bought herself a sewing machine through an MGVS trainees revolving loan fund (interest-free). Today, she trains young girls at the MGVS Marora Sewing Centre, runs her own tailoring shop in her village, has sold incense, purchased a carpet loom and makes carpets for sale as well. And now, as of November 15, 2008, Kamli Devi has been hired to teach Sewing, Knitting and Incense Stick-making to high school students (Classes 6-12) 10 days each month from 9:00 am to 10:00 am, at the Satyon Inter-College in Pujargaon, by the women’s organization, Mahila Samakhya: she is being paid Rs.1000/- per month for these classes. 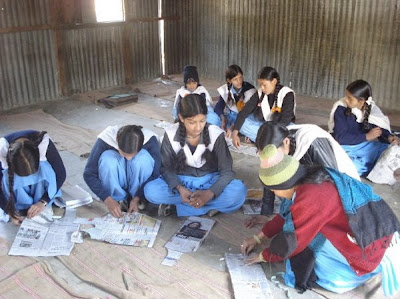 Villager Kumari Nirmala has also opened up shop this year as a Beautician in the village of Lambkande; the Cottage Industries Dept. in Dehradun certified her upon completion of her training with MGVS just recently. Unlike Mrs. Devi, however, Kumari Nirmala is unmarried and her sister, Kumari Sonika, is hoping to her in business soon. Two others in the valley, Sarita Devi (married) and Kumari Reeta (unmarried) are also just starting up Beautician businesses through an interest-free revolving loan fund MGVS has set up for Beautician enterprises.

Gender follow-up sessions from July – September 2008, with 154 teenage girls at the 3 high schools of the valley revealed that alongside 62% who intend to complete the 12th standard and/or go on to further studies, 77.5% of these young girls see themselves doing some kind of service or becoming self-sufficient in the future. Aside from the MGVS Gender program, it seems that the examples of self-employed women of the valley including the now 28 women of Women’s Organic Farmers’ Cooperative are effecting changes in attitude about gender roles among the teenage girls of the valley. 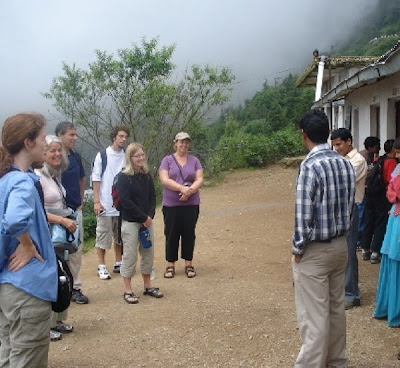 In August 6th, 2008, a group of 6 SAGE educators, brought together by two other Woodstock graduates, Mr. Nathan Scott (’84), Executive Director of SAGE (Studies Abroad for Global Education), and Mr. John Alter (‘65), visited with MGVS. SAGE students have been coming out to India, and attending nearby Woodstock School for many years now, but this was the first time SAGE had sent educators out. Many ideas and experiences were exchanged with the MGVS team: it was a real delight to meet with such an inquisitive group. In March 2009, Mr. Ben Snyder plans to visit again, this time with a group of students from Noble & Greenough School, who are preparing to work alongside the MGVS team for a week. 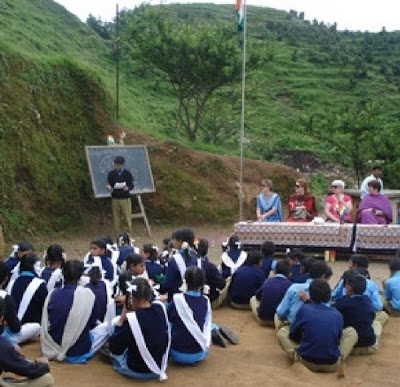 On August 13th, 2008, Dr. Christine Burnett of an Ireland based organization called Saphara, made it out to the MGVS office in the pouring rain. Dr. Burnett and a group of 3 other ladies then returned on August 15th to celebrate Independence Day at the Kaplani School, when fortunately, it did not rain. MGVS really enjoyed their visit and we look forward to meeting with Dr. Burnett in February 2009 when she will be out to visit the project in Saklana and then again in July 2009, when she will be bringing a group of youths along.

Thank you for your continuing interest in Mussoorie Village Development Committee
Posted by MGVSNEWS at 6:15 AM No comments: