Patrani-Donk Drinking Water Pipeline Repairs
The 3.5 km. long, 24 year old drinking water pipeline that MGVS laid down in Patrani Donk villages as our very first project in development, was repaired for the second time by March 2009. The villagers of Patrani and Donk approached MGVS regarding their pipeline, with an application for urgent repairs. MGVS helped the communities of both villages organize collective meetings through the MGVS Donk Primary School Head Teacher and other MGVS staff. At the meetings, the villagers decided who would volunteer to work on which part of the repairs, and how the pipeline’s maintenance would continue after the repairs were complete: ie. which tools were lacking and who would be responsible for them. MGVS Staff then worked together with the villagers through the winter to repair the line as quickly as possible. 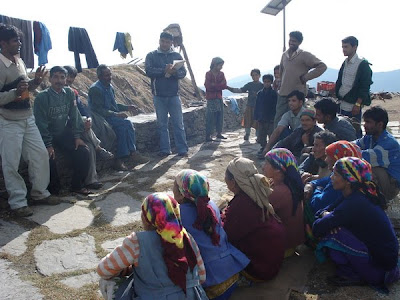 Meeting with Villagers of Patrani and Donk

Water testing had shown there was some fecal coliform in the water at its source, and so the MGVS technical team ensured a water filter was distributed to each family. Training was given on how to use and maintain the filters in early March 2009. HAVE Canada who had funded this pipeline 24 years ago, as well as the first set of repairs in 1999, kindly agreed to help with repairs a second time, and to bear the cost of a water filter for each of the 20 families who depend on the Patrani-Donk pipeline. 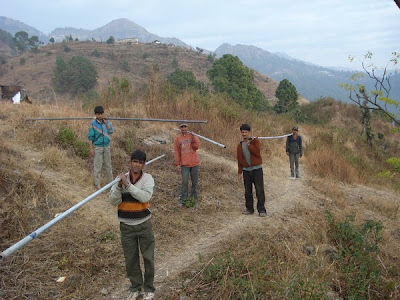 New Leaders in Women Farmers Organic Cooperative
This year the Women Farmers Organic Cooperative addressed the issue of democratic governance, as they grow in power and numbers. Since the Women Cooperative is a registered body, they are required to hold elections once they have officially completed three years of registration. Elections took place in the month of October in a General Meeting. The concept of electing new officers was new to Cooperative members, and a challenging learning experience for all. MGVS Staff emphasized the importance of fairness and democratic governance, at this meeting and provided training on the benefits of the election process. The election was successful in eliminating the monopoly of certain officers and gave an opportunity to some of the poorest members to have their voices heard. Through this election exercise, it became clear to all that accountability of the officers is set by the members and that all members in a Cooperative have equal rights. 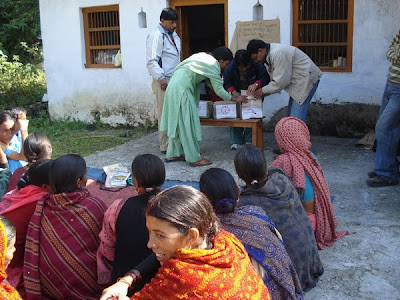 Saklana Women meet an Influential Woman Pradhan
From July 25th - 27th, 2009, MGVS arranged an exposure visit for ten newly elected women Panchayati representatives from the Saklana Patti. They visited Bhuvneshvari Mahila Ashram in Anjani Sen, where the woman Village Council Chief – pradhan, of Anjani Sen (Distt. Tehri, Uttarakhand State), Mrs. Neelam Rana, spoke. Mrs. Rana had won her seat in her village, Barkot, 5 years ago, and she was recently re-elected as pradhan even though the seat was a “General” seat this time, not a “Reservation” seat. (There is currently a 50% reservation for women in the Panchayats in the State of Uttarakhand.) Mrs. Rana explained different government schemes and programs she has helped bring to her panchayat: ie. Widow, disabled & old age pensions, funds for development through approaching higher level members of parliament under “Vidayak Nidi”. She also explained that she met personally with the people of her panchayat and understood their pain, and that she did not pay attention to comments about she was going to meetings alone etc. – and that in the end she was able to win the faith of her people without being known as a “Pati Pradhan” (Husband’s Pradhan). This exposure visit went a long way in complimenting pre- and post-election trainings MGVS has provided to the women of Saklana Patti.


Community Goatry
On February 26th, 2009, MGVS organized a joint meeting of a group of 14 Irish ladies, brought to MGVS through the Irish NGO, and Friend, Saphara, the largest women’s Self-help Group (43 members) in Semwalgaon Walla of the Saklana Valley. The MGVS team also attended the meeting and facilitated with translation. Each group shared the realities of their lives and discussed their fears and dreams. The cultural exchange was a special experience for both groups.

The Women group of Semwalgaon also expressed their keen interest to do some income generating project collectively. After much discussion the women group agreed to start community Goatry with 10 female, and 2 male goats. The Irish Ladies group happily agreed to bear the cost of the 12 goats. It was understood that Semwal Gaon group have  experience in raising goats, also it is a good business in the area. 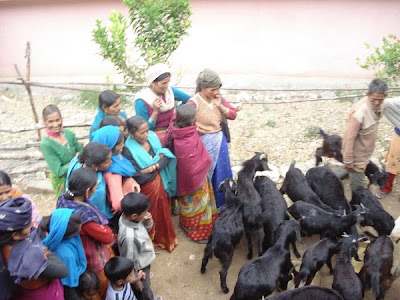 MGVS is Evaluated
From February 5-10th, 2009, MGVS underwent a 3-year evaluation of our work in Saklana Patti, sponsored by TEAR Australia. The Evaluation was conducted by Dr. Srivastava, a medical doctor, an advisor on community health issues,  and a well-known Gender Training resource person who is presently Director of SAMGRA in Harbertpur. The Evaluation was a great learning/training experience for the MGVS team. He conducted the evaluation in a participatory style, through meetings with the MGVS team, meetings with Self-Help Groups, Cooperative officers, Income generating program beneficiaries, scho0l teachers, panchayat members and pradhans, and Village Health Workers etc.

In his Evaluation report, Dr. Srivastava appreciated a number of sustainable changes that had come about in Saklana Patti as a result of MGVS efforts. In his recommendations, he suggested this would be the right time to begin a Phase-out of the Saklana Patti area, and hand over 100% responsibility to the people of the valley. The Women Farmers Cooperative was an exception, however, for which he suggested some further MGVS guidance from time to time, would be beneficial, after a Phase-Out of the area is complete. He also gave MGVS some very useful tips on starting work in a new area 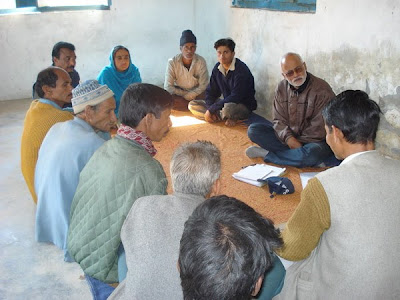